According to the details, Reham Khan has alleged that Aneel Mussarat was involved in the secret purchase of the PIA-owned Roosevelt Hotel.

She alleged that the business man got an undue advantage in the alleged sale of the hotel due to his close links with Imran Khan.

However, the apology letter sent by Reham Khan is doing rounds on social media.

The letter states: “I am the operator of Youtube channel Reham Khan official and in a video posted on December 6, 2019, I made reference to Aneel Mussarat and I made a number of comments and insinuations regarding Aneel Mussarat.”

“In seeking to make amends, I have removed the video and I wholly retract my comments and apologize to Mr. Mussarat for any damage or harm which may have been caused to Mr. Mussarat, his businesses, or to the charitable causes he supports. I will not be making any further comment about this matter.” 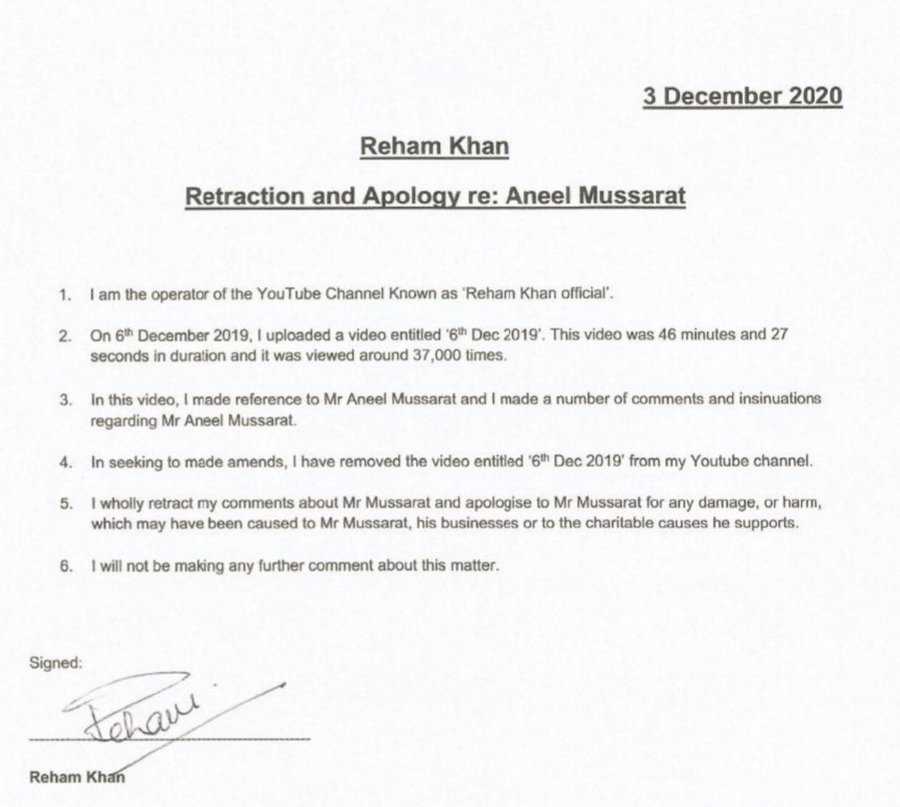 Reham Khan needs no introduction. Many people know her as PM Khan's...

Moreover, both sides confirmed their settlement out of court after Reham agreed to issue a clarification and an apology.

Also, Aneel Musarrat has issued a statement regarding this defamation case.

“I never had anything to do with the sale or purchase or any kind of dealing with the Roosevelt Hotel. I have done all businesses in the UK and Europe and I have done so through fair competition,” he said.

Mussarat further added, “My friendship with PM Imran Khan has nothing to do with any businesses I am involved in. I have not done any business in Pakistan to avoid conflict of interest issues and I will continue to maintain this position.”

KARACHI: The Utility Stores Corporation (USC) has been found to have sold...

LAHORE: The lines are drawn and the internal divide within the Pakistan...

Govt to facilitate investors for revival of SOEs: minister

ISLAMABAD: The government has reiterated the resolve to facilitate foreign, as well...