Jamshed Iqbal Cheema has been appointed as Special Assistant to Prime Minister Imran Khan on Food Security on Monday.

Shahbaz Gill along in his tweet also said that Cheema is a hardworking man.

On the other hand, Senator Faisal Javed extends congratulations to the new SAPM on his new post.

“Congratulations to Jamshed Iqbal Cheema upon getting nominated as Special Assistant to the Prime Minister on Food Security,” he tweeted.

Congratulations to Jamshed Iqbal Cheema upon getting nominated as Special Assistant to the Prime Minister on Food Security. He is an old PTI member and an expert in Food Security and Agricultural Sciences. pic.twitter.com/L5bvgKnxVV

Note that Jamshed Iqbal Cheema is an old Pakistan Tehreek-e-Insaf (PTI) member and an expert in Food Security and Agricultural Sciences.

Earlier on April 17, a notification issued by the cabinet division cited the removal of Hammad Azhar as finance minister and given the ministry to Shaukat Tarin.

The Pakistan Tehreek-e-Insaf (PTI) government had appointed a fourth finance minister in almost three and a half years. 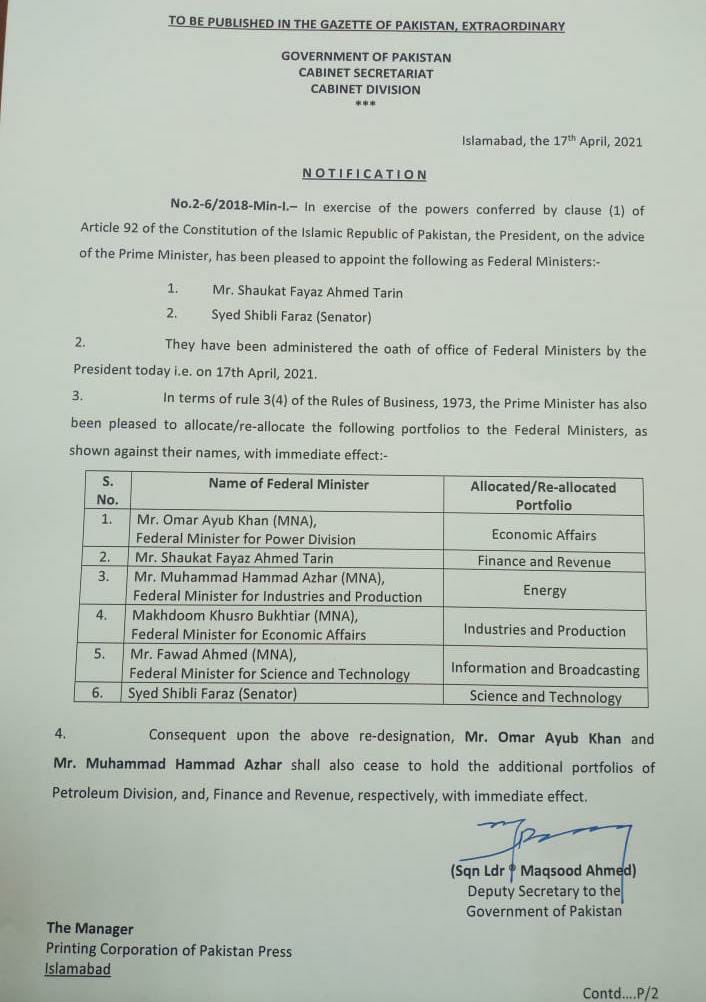 On the other hand, Fawad Chaudhry also said in a Twitter message that the Prime Minister has made changes in the cabinet and also informed about their details.

It may be recalled that reports of reshuffle in the cabinet had been circulating for a long time and yesterday Senator Faisal Javed in a Twitter message also congratulated Fawad Chaudhry on getting the portfolio of Information Ministry.