New Gwadar Int’l Airport to be operational by 2023

Prime Minister Imran Khan called upon the international community to strengthen and stabilise the government in Afghanistan for the sake of the Afghan people.

Addressing the 76th session of the UN General Assembly via video link, he said if the world community incentivises them, it would be a win-win situation for everyone.

He said the Taliban promised to respect human rights, to form an inclusive government and to not allow their soil to be used by terrorists. Besides, they had also been given amnesty.

The premier pointed out that it was a critical time for Afghanistan. If we neglect the country now, according to the UN, half the people of Afghanistan are already vulnerable, and by next year almost 90% of them would go below the poverty line.

He said a huge humanitarian crisis was looming ahead, and this would have serious repercussions not just for the neighbours of Afghanistan but for the world. 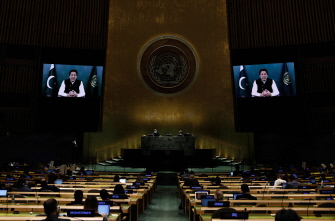 PM warned that a destabilised and chaotic Afghanistan could become a haven for terrorists again, according to Radio Pakistan. He urged the UN Secretary-General to mobilise the world to help the Afghan people.

War on terror and Pakistan

Narrating the impact of the US war on terror and Afghan conflict on Pakistan, PM Imran said Pakistan suffered 80,000 casualties with a loss of 150 billion dollars to the economy.

He told the UN that 480 drone attacks were conducted inside Pakistan that caused more collateral damage than the militants they were targeting.

Between 2004 and 2014, 50 different militant groups were attacking Pakistan.

PM Imran said Pakistan suffered because it became an ally of the US in Afghanistan. Attacks were being conducted from the Afghan soil into Pakistan. He instead of appreciating our sacrifices, Pakistan was blamed for the turn of events in Afghanistan.

PM urges pressure on India for resolution of Kashmir dispute

Alluding to Indian atrocities in the illegally occupied Jammu and Kashmir (IIOJK), PM said India was engaged in efforts to change the demographic structure of the occupied territory and transform it from a Muslim majority into a Muslim minority.

The resolutions prescribe that the final disposition of the disputed territory should be decided by its people, through a free and impartial plebiscite held under the UN auspices.

He said the most recent example of Indian barbarity was the forcible snatching of the mortal remains of the great Kashmiri leader, Syed Ali Shah Geelani, from his family, denying him a proper Muslim funeral and burial. He called on the UN to demand that Geelani’s mortal remains be allowed to be buried in the cemetery of martyrs with appropriate Islamic rites.

Reaffirming Pakistan’s desire for peace, PM linked sustainable peace in South Asia with the resolution of the Jammu and Kashmir dispute, under the relevant United Nations Security Council resolutions, and the wishes of the Kashmiri people.

He said the onus remains on India to create a conducive environment for meaningful and result-oriented engagement with Pakistan.

PM said India should reverse its unilateral and illegal actions.

One, reverse its unilateral and illegal measures instituted since 5th August 2019; two, stop its oppression and human rights violations against the people of Kashmir; and three, halt and reverse the demographic changes in the occupied territory, he explained to the UN.

ISLAMABAD: The Ministry of Finance has rejected the news regarding the failure...

ISLAMABAD: The 46th National Rehmatul Lil Aalameen Conference would commence in the...

ISLAMABAD: Rice is the most important human food crop in the world,...

CAIRO: In another sign that the Saudi Arabian economy is recovering from...