American broadcaster Glenn Beck has said that no other global leader but Prime Minister Imran Khan took an initiative to leverage his position in saving the innocent in Afghanistan and “putting humanity before politics”.

“His leadership of placing humanity before politics is a great example of inter-faith cooperation, bridged by the shared value of human compassion,” Beck said in a series of tweets and a letter, sharing details of the support extended by PM Imran Khan in the evacuation of the American and local people from Afghanistan.

Beck mentioned that in hours of desperate need, numerous leaders in political and civil society reached out around the world for help, however, the “silence was shocking”. Some calls and requests received a simple yes or no, some went unanswered, he added.

7. PM Khan quickly asked his people to intervene on our behalf and was able to make the difference between life and death for those on board the first three aircraft to leave Mazar e Sharif in Afghanistan with nearly a thousand civilians on board. MANY of them are Americans. –

“But we received an immediate response to our requests from Prime Minister Imran Khan of Pakistan, who then acted on his willingness to assist,” he said, expressing a sense of gratitude.

“PM Khan quickly asked his people to intervene on our behalf and was able to make the difference between life and death for those onboard the first three aircraft to leave Mazar-i-Sharif in Afghanistan with nearly a thousand civilians on board,” he said. “Many of them are Americans.” 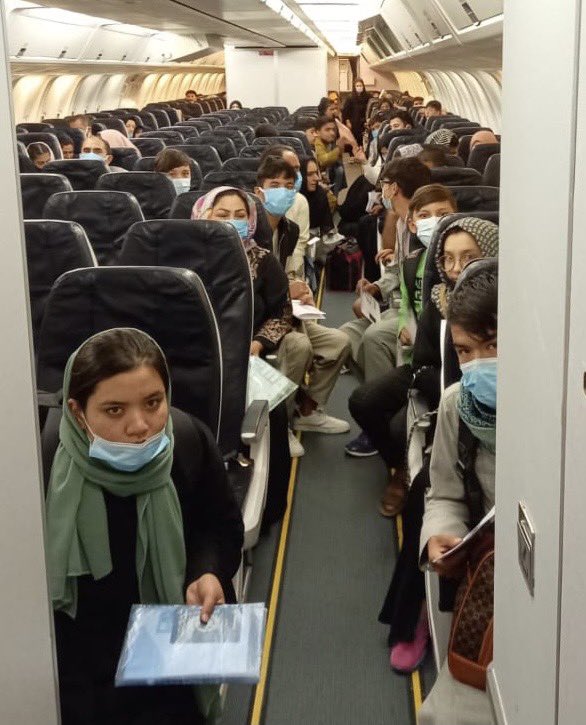 He said PM Khan’s “tireless leadership, supported by the military and civilian resources of Pakistan and their ability to cooperate with the Taliban, enabled the first two flights to depart Mazar-i-Sharif with FIFA female athletes and their families on board”.

Words cannot express our gratitude to Prime Minister Khan and the people of Pakistan. @ImranKhanPTI pic.twitter.com/8Bz7frUjyY

Beck said, “Collectively, we transcended religious differences, political divides, national boundaries and local dynamics – it was about a humanitarian effort aimed at saving innocent victims facing certain death if left behind in a war-ravaged country.”

“He [PM Imran Khan] took the lead to save innocent lives irrespective of politics, race, religion or culture,” he said. “He has been gracious with his time and never once questioned our motives.”

He said other media outlets may have their own agenda for criticizing Imran Khan over the last few days, but the leader should be recognized for the lives he helped save this weekend.

“I sincerely thank him and pray he continues to help us work to build a bridge with the common interest of protecting innocent, precious lives during this humanitarian effort,” said.

He stressed that the United States should collectively recognise Pakistan’s assistance at this juncture.

“We will not forget this support that has enabled America and its allies to make good on their promises to those that helped them without pause or reflection,” he said.

Beck said Pakistan had once again proven to be a valued partner in all seasons for the United States, despite recent criticism from some sections of the American media.

“We look forward to the ongoing continued cooperation in the coming weeks as we continue our common goal of protecting the innocent during this humanitarian effort, and the United States should collectively recognize Pakistan’s assistance at this juncture.

KARACHI. Muhammad Aslam, a bookseller at the old books market in Karachi’s...