Gilgit Baltistan Election 2020: What each of the 24 constituencies lack

Gilgit Baltistan Election 2020: What each of the 24 constituencies lack

Politicians from major political parties have campaigned furiously in the past few days. They gathered large crowds and made lofty promises as they contested for the northern territory’s  Legislative Assembly seats.

Here’s what you need to know about all the constituencies up for grabs, the demographics of each constituency and their concerns ahead of the election day.

According to a 2017 population census, Gilgit Baltistan is home to 1.4 million people. 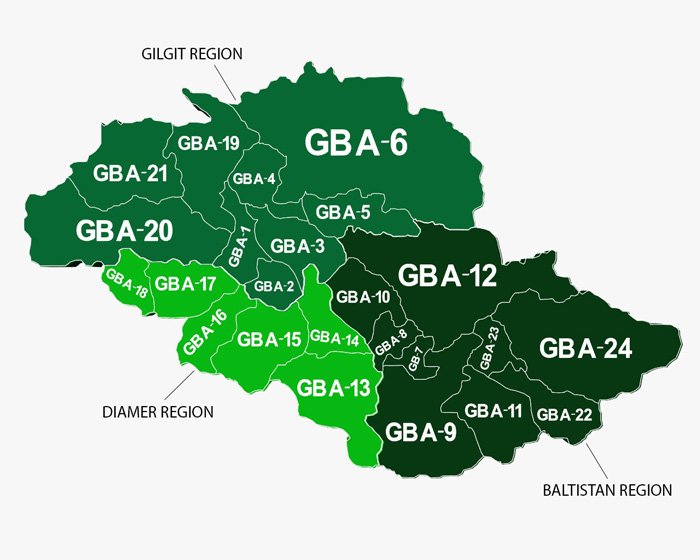 The mountainous territory is divided into three regions:

This region has a total headcount of 570,000 and is divided into nine constituencies.

This area has been overlooked in terms of infrastructural development. Roads remain damaged, residents lack access to clean drinking water and electricity. Power outage in winters can last as long as 22 hours a day.

PML-N-led government built new roads in the area at the end of its tenure, yet other outstanding issues remain. Lack of potable water, appropriate health facilities and unemployment top the list of concerns.

Lack of adequate sewerage line is a major concern in this area, as is a lack of universities, which compels students to move to other districts for higher education.

Internet and education top the list of the voters’ worries. The constituency also lacks educational institutes.

The area has been deprived of electricity infrastructure and access to clean drinking water. The area’s roads are in a state of disrepair and residents complain of being cut off from the rest of the region.

Healthcare is a primary issue as the constituency lacks a Tehsil Headquarters Hospital. Scarcity of educational facilities in the area has left girls the most affected. They often give up on their education after secondary school. Internet issues are also a concern.

Critical care and women’s health are significant challenges in the constituency. The largest health facility lacks a gynecologist or surgeon, patients who require such care need to be taken to hospitals in other districts.

A severe shortage of potable water in the area has forced people to turn to rivers and canals, leading to frequent outbreaks of water-borne diseases.

The Baltistan region has a population of 538,300 and consists of nine constituencies.

Infrastructural issues proliferate the area, as a significant chunk of the constituents live in darkness due to a bare-bones electricity infrastructure. Furthermore, roads are broken and the area lacks adequate health facilities.

Unemployment is the constituents’ foremost concern. Moreover, educational facilities in the area are lacking as girls have no college to go to while boys have just one.

Residents of this constituency worry about a lack of potable water, electricity and unemployment.

The roads of the area are not fit for travel and electricity supply is patchy.

The constituency is one of the areas worst affected by natural disasters which occurred in the past. There is widespread devastation caused by flooding and landslides. The area’s infrastructure has yet to see improvement.

The constituency lacks basic education and health facilities. Moreover, residents do not have access to clean drinking water.

This area lacks basic education and health facilities. It has poor infrastructure and unavailability of potable water.

The most pressing concern of the constituents is the lack of health facilities. Patients requiring surgery are forced to travel to other cities which are at least three hours away.

While the area is relatively more developed, the main road connecting it to the Karakoram Highway is in need of repair. In its tenure, the PPP government began constructing a tunnel for the residents, but it never saw the light of day.

The area lacks access to clean water, while broken roads and ill-maintained bridges have left residents traversing a rickety wooden bridge to reach nearby villages.

Electricity load-shedding is a major concern for the constituents. In the cold winter months, power outages can last as long as two days.

The roads in the constituency are in a state of disrepair, while the only hospital in the area offers very basic services.

Healthcare and education are primary concerns for voters as the constituency has only one hospital and very few schools.

Hiba Bukhari, a Pakistani actress, has stolen the hearts of her admirers...

Pakistani model, actress, and dancer Mathira have spoken up about Sadaf Kanwal’s...