When it comes to the world of controversy, singer and actress Rabi Pirzada is no unfamiliar.

Previous month she got the public attention because of her pictures in wearing a faux explosive-vest in support of the Kashmir cause.

But the things are serious now and she stuck in a great tragedy.

Last night ‘the private data’ of Rabi has been leaked.

In that private data her naked and inappropriate pictures were included. 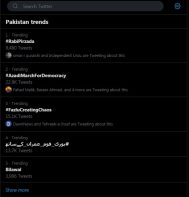 According to details, it can be seen that Rabi made the photos and videos from her mobile phone.

When we tried to take her opinion, her phone was switched off.

But we received a screenshot of her WhatsApp, 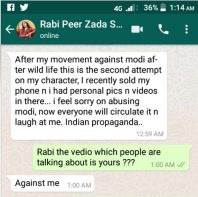 Information about how and where these actress photos were leaked is not revealed yet, but it is a hot topic on social media right now.

The animals include an alligator, four pythons and snakes as pets.

Rabi Pirzada has claimed that the reptiles don’t belong to her and she had rented them for the video.

According to DG wildlife protection, “These animals fall in the Third Schedule of the Wildlife Act, and no one could be issued a license for keeping them as pets.”

He said the violator of the Act could face up to two-year imprisonment.

She has also hosted a weekly television show.

If you love eating candy and you are aware of various types...

Government of Pakistan is looking up to ban Valentine's Day, prohibiting the...

Guess Who The Politician Baby Is In The Picture

Karachi: The Sindh government has declared 5th February a public holiday on...