Junaid Safdar has been quite the centre of attention among the social media users following his Nikkah with Ayesha Saif.

Now the video of Junaid Safdar singing on his D-day meets the internet and netizens can’t help but laud his good looks and melodious voice.

Even the showbiz celebs also can’t get over his lovely voice. Several actors took to the comments section to praise the widely popular video since yesterday.

His vocals and choice of song has won the hearts of many netizens, regardless of their political affiliations. He opted for ‘Kia Hua Tera Wada’ by the late Mohammad Rafi.

Actresses Saboor Aly, Sana Javed and Zoya Nasir couldn’t help but comment a “wow” in response to the singing.

Actor Iffat Omar also responded with a desi “wah” over his singing skills. 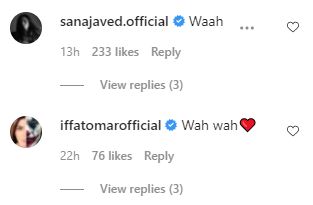 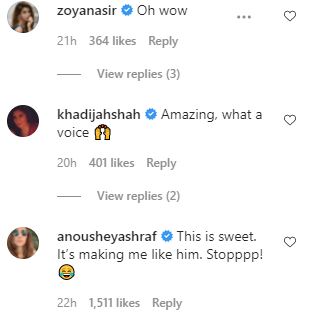 Also, actress Areeba Habib took to her Instagram to praise the amazingly talented Safdar after his viral video brought storm over the internet. 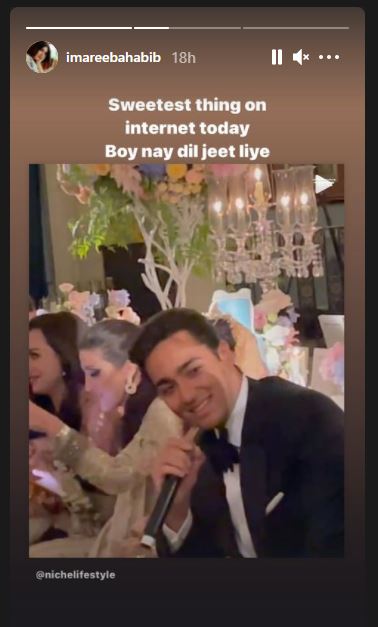 Junaid’s voice has earned the unanimous praise of netizens who momentarily set aside their political differences to agree on one single thing.

Here are some reactions from netizens:

Junaid Safdar got some voice 🎶 pic.twitter.com/Su9GPoONNO

Junaid safdar is handsome and a good a singer pic.twitter.com/Z4tAufXF7O

Note that the son of PML-N Vice President Maryam Nawaz, Junaid Safdar had tied the knot with Ayesha Saif Khan, daughter of former NAB chairman Saifur Rehman who is currently living as an expatriate in Qatar.

The ceremony took place at the Lanesborough Hotel in London.

As his parents, Maryam Nawaz and Safdar Awan, could not make it to London to attend their son’s wedding ceremony due to the corruption cases they were facing in Pakistan, his grandfather Nawaz Sharif attended the ceremony and filled the gap.

Maryam and Safdar attended the ceremony through a video link.

WATCH: Junaid Safdar enthralls guests by singing a song at his Nikkah ceremony