The most beloved social media couple Minal Khan and Ahsan Mohsin Ikram are now officially married. Their Nikkah and wedding event is taking place today, Friday after some of the luxurious events which include their Dholki and Mayun. The beautiful couple is now stepping towards their new journey.

The newly married Minal khan has updated her fans that she is now officially married to Ahsan Mohsin Ikram as she posted her adorable wedding picture on her Instagram account along with the heartfelt caption, “Now you’re officially mine forever! Mr & Mrs Ahsan ikram,”

Here are some emotional moments of Minal Khan’s Rukhsati. 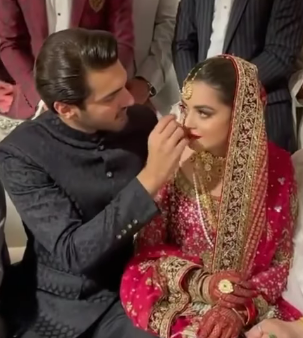 Did you know the actress's hair caught fire while cutting the birthday cake?