Who is leading the US 2020 Election polls – Republicans or Democrats?

American voters will decide on 3rd November whether Donald Trump will remain in the White House for another four years, or a new president will be elected.

Joe Biden, who is best known as Barack Obama’s vice-president and has been in US politics since 1970s, belongs to the Democratic Party and is standing against the Republican president Trump.

National polls give good guidance as to how popular a candidate is across the country, however, they are not an accurate prediction of the election results. This is because the US uses an Electoral College system which means winning the most votes doesn’t always win you the election.

Joe Biden has been ahead of Donald Trump in most national polls since the beginning of the year. He has gained around 51% of the votes and has had a lead of 10 points. 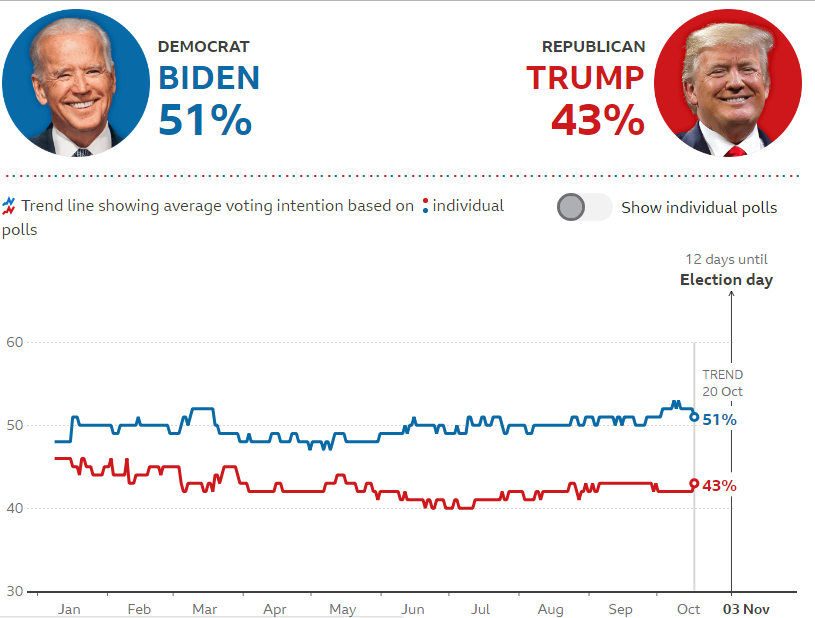 Candidates stand a chance of winning in just a handful of states. The places where the election will be won and lost are known as battleground states. Some of these states have a lot more Electoral College votes on offer than others so candidates choose to spend more time campaigning there.

Polls suggest that Mr Biden has a big lead in Michigan, Pennsylvania and Wisconsin – the three states won by his rival Republican in his previous victory in 2016. Political analysts say Mr Biden is “favored” to win the election and is “very likely” to beat Mr. Trump.

US election 2020: Trump and Biden argue over final debate topics

US President Donald Trump and his opponent Joe Biden are arguing over...