Watch: Baby girl gets out of bed using this brilliant technique

Recently a girl named Alina Khan shared a video wearing a kameez without the shalwar and everyone was just left wondering why. According to the Alina “Shalwar is formality and dupatta is useless. Both make you feel ugly.” 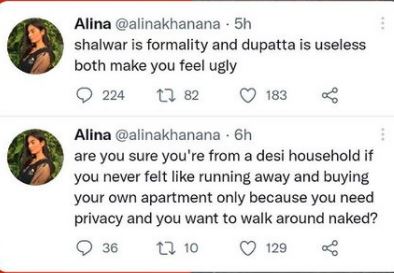 Netizens trolled her. From the insane idea to the sheer stupidity of it.

Alina deleted her tweets soon after the backlash

Following her tweets, shalwar became a trending topic on Twitter. Thousands of people had tweeted about the hashtag. Why did Priyanka Chopra drop ‘Jonas’ from her bio?

Bollywood actress Priyanka Chopra’s divorce rumours are rolling around the internet like...

People are amazed by seeing the video of a cute little girl...

A young man was seen in a viral video beating an injured...

There is no doubt that the saree is one of the most...

Watch: fire breakout at the wedding but guests continue to food in a viral video

Weddings bring with them a lot of fun and create memories. It's...

When there is no obvious answer to a problem, the time-tested concept...

When a couple uses an excavator as a seat at their wedding...

No Omicron case detected in Pakistan as of yet: SAPM Dr Faisal Sultan

Pep Guardiola said Bernardo Silva was "on another level" after the Portugal...

Seal hides in a boat, surrounded by killer whales

The seal rushed onto the boat and stuck between the engines to...