One of the most talented actresses from Pakistan’s drama industry, Mansha Pasha has shared her stunning yet sizzling pictures from latest shoot.

The actress took to Instagram to treat her fans with her new gorgeous snaps in a long floral dress with a unique crop-top.

In another post, the Zindagi Gulzar Hai starlet posted a close-up of the same picture which highlighted her exquisite make-up look and face glow.

However, actor Zahid Ahmed, who works in a lead role alongside Mansha Pasha in drama serial Mohabbat Tujhe Alvida, jumped in the comments section and sarcastically responded to her picture.

Furthermore, replying to his comment, the actress too responded in a funny manner. 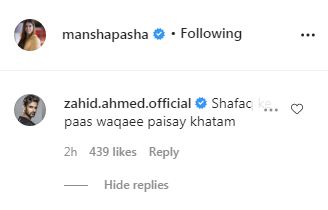 It is to be noted that both the actors are starring together in a drama, playing characters of Shafaq and Shahaan.

She is quite active on social media and often shares her opinion on different on-going matters.

One of the most talented actresses from Pakistan’s drama industry, Mansha Pasha...

Ayeza Khan leaves fans to gush over her stunning looks

This is why Justin Bieber, Hailey Baldwin are couple goals!

Celebrity couple Justin Bieber and wife Hailey Baldwin are always under the...

According to Cole Sprouse and his brother Dylan, Suite Life of Zack...

Kim Kardashian and Kanye West divorce getting finalized with lawyers

Kim Kardashian and Kanye West are getting divorced and it is likely...

Who Will Represent Pakistan At 59th Inauguration Ceremony of US President?

Today is the last day of the 45th President of the United...

Chairman NAB says, “The bureau only acts in accordance with law, exercises”

Mercedes Benz has introduced its full-electric car EQA250. This compact SUV is...