Leading host and actress of the Pakistani showbiz industry Sanam Jung has expressed regret over the neglect of national heroes by the government of Pakistan.

Sanam Jung shared a post to her Insta Story about former Pakistani cyclist Muhammad Ashiq who represented Pakistan in the 1960 and 1964 Olympics.

Muhammad Ashiq, a Pakistani cyclist, faced financial difficulties in his old age and was forced to make a living by driving a rickshaw. 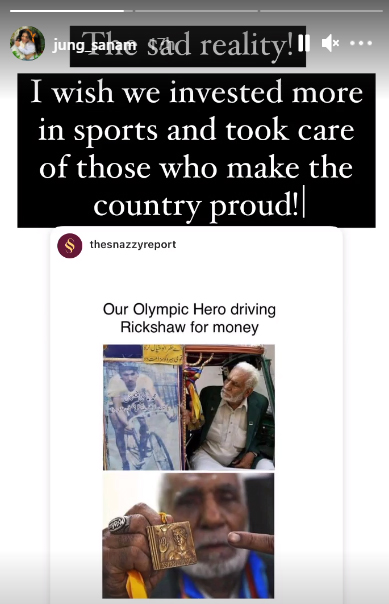 “The sad reality!” the actress wrote in her Instagram story.

“I wish we invested more in sports and took care of those who make the country proud,” she added.

Old articles about former Pakistani cyclist Muhammad Ashiq have gone viral on various social media pages since the Pakistani government was blamed for failing to compete at the Tokyo Olympics despite of the best efforts of Pakistani athletes.

Pakistani cyclist Muhammad Ashiq won several gold medals throughout his Olympic career, but unfortunately after the end of his career, he was not provided any assistance by the government and was forced to ride a rickshaw owing to his poor financial circumstances.

It should be noted that Pakistani athletes say that they were not provided with the basic facilities by the government due to which they failed to succeed in the Olympics.

Leading Pakistani host and actress Sanam Jung has called on the government...