Members of the entertainment industry deal with constant scrutiny on social media. While several fans take to the commentS section to shower celebrities with love and appreciation, a significant chunk of it is populated by social media trolls.

This time, acclaimed actress Mahira Khan was subjected to hate and displeasing comment by a netizen. The user was seen mocking her for working in India which read, “Aapko India say abhi danday nahi paray.”

To which, the Humsafar star replied giving a shut-up call to the user. “Aapko apni ammi sya paray hotay tu is terhan ki bakwaas an kehtay,” she wrote. 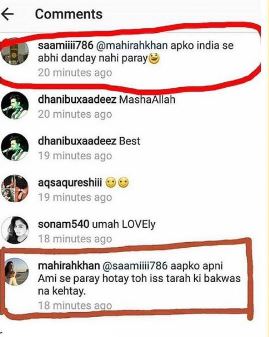 On the other hand, singer Atif Aslam released his latest song Ajnabi, along with a music video featuring actor Mahira Khan. Atif took to Twitter to announce the release of the video on YouTube.

“To all those who’ve been waiting for and hyping up my new song, here’s Ajnabi for you. Celebrate the music and leave your thoughts about it down below,” he wrote.

To all those who've been waiting for and hyping up my new song, here's Ajnabi for you. Celebrate the music and leave your thoughts about it down below.. Dil Labhda thikana.. Na koi bahana na koi fasana..!https://t.co/M0vDZ8Yuol#AtifAslam #mahirakhan #AsimRaza #ahsanparvezmehdi pic.twitter.com/O0u97KCPpO

While Mahira announcing his video song release on Instagram, she wrote, “At one point during this shoot me and Atif were sitting on top of a roof, and suddenly we both looked at each other and smiled. 10 years ago that’s how I started my career with Bol, sitting with Atif, singing Hona Tha Pyaar.”

One stunning dress styled in three unique ways - Who pulled it off better?

Pakistani actresses have always left their fans awestruck by their stunning beauty...

Prompted as a biopic for the first woman in the history of...

West Indies will enter the T20 World Cup as one of the...

Apple, Samsung and Google gearing up for the huge events of the year 2021

All 3 hardware trend setters are bucking up for their respective events...