Federal Minister for Planning, Development, Reforms & Special Initiatives Asad Umar has advised the World Health Organization (WHO) to take a worldwide resolution about the vaccines that are suitable for traveling instead of every country making its own decision on vaccine acceptability.

“Vaccine acceptability decisions have to be taken by a global institution like WHO,” tweeted Minister Umar who also leads the National Command and Operations Centre (NCOC). 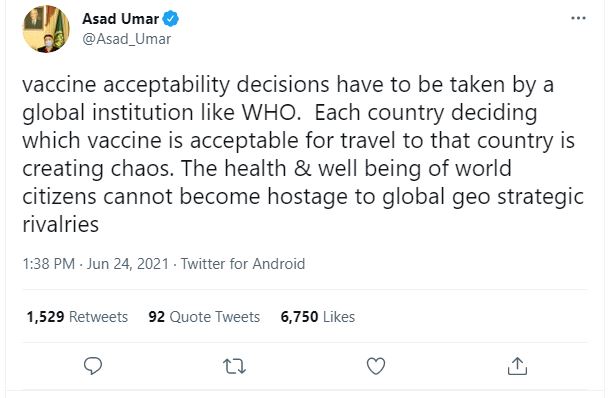 “Each country deciding which vaccine is acceptable for travel to that country is creating chaos. The health & well-being of world citizens cannot become hostage to global geo-strategic rivalries,” he added.

Most of the vaccines that are being directed to people in Pakistan are Chinese, a lot of countries, including Saudi Arabia, are not accepting Chinese vaccines.

The government had discontinued the Rs25,000 denomination prize bonds. It will no...

The current USD to SAR currency exchange rate can be found here....