“Pakistan attaches special importance to its bilateral relations with Russia,” said FM Qureshi. “Strengthening of these ties, after a period of time, is welcome news,” he added.

The Pakistani foreign minister told his equivalent that Islamabad has devoted great importance to the validation of the Pakistan Stream Gas Pipeline project, adding that both countries will soon pledge the project to improve their collaboration in the energy sector.

Qureshi further appreciated Russia’s decision to lift the ban on the rice import from Pakistan as a welcoming decision towards the bilateral relations between the two countries, Qureshi also thanked Lavrov for facilitating Islamabad.

The foreign minister reminded Lavrov that Pakistan anticipated the quick delivery of 5mn doses of the Russian Sputnik V vaccine.

In April this year, the Russian foreign minister arrived in Pakistan to hold talks with the Pakistani leadership on economic cooperation and other global issues.

The Russian foreign minister held meetings with Prime Minister Imran Khan and other senior leaders during his visit.

In April this year, the Russian foreign minister arrived in Pakistan to hold talks with the Pakistani leadership on economic cooperation and other global issues and to further enhance the Pak-Russia relations. 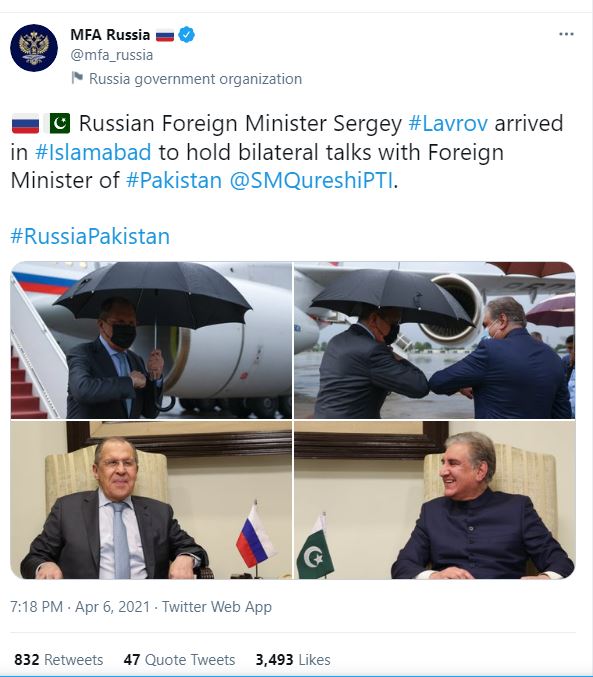 Danish Taimoor is a Pakistani actor and model. He was born on...

The electioneering in the Azad Jammu and Kashmir has come to an...

An unsettled Pakistan side is ready to face an in-inform West Indies...