Sonya Hussyn reacts to Sharmeen pulling her down for old comments

Sonya Hussyn reacts to Sharmeen pulling her down for old comments

Sonya Hussyn responded after filmmaker Sharmeen Obaid Chinoy called her out for “dissing” Mahira Khan in a 2018 interview.

Sharmeen Obaid Chinoy believes actor Sonya Hussyn will never be Mahira Khan and does not like her previous comments about her.

Hussyn’s words from a 2018 interview were recirculated in the article. On August 12, 2018, she appeared on Yasir Hussain’s After Moon Show.

Reacting to Sharmeen Obaid’s remark in which she was targeting Sonya Hussyn for making a comment against Mahira Khan, Sonya wrote: “Pulling one woman down while putting up another in full view of public and talking about upbringing!” Hussyn said in an Instagram Story. 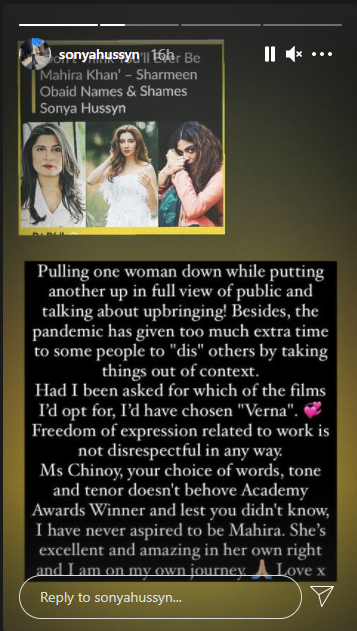 “Besides, the pandemic has given too much extra time to some people to “dis” others by taking things out of context,” she said.

One of the questions Hussyn was asked was if she were Mahira Khan, which film would she not do: Verna, Raees, or Ho Mann Jahaan.

Hussyn chose Raees. “Why, because you don’t want to work with Shah Rukh Khan?’ asked the host.

“No, never,” replied Hussyn. “It was never my dream to work with Shah Rukh Khan. My dream is that your character should be such that you are seen and you’re not just a side character to a hero,” she explained.

Chinoy didn’t seem to like what she said and replied to the Grazia Pakistan post. “Don’t think you’ll ever be Mahirah Khan so you won’t ever get to say no – don’t diss other women in the industry, [it] reflects poorly on you and your upbringing,” she wrote. 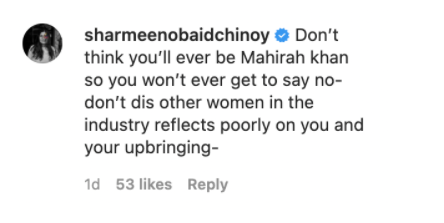 Youm-e-Istehsal: PM Vows To Stand With The Oppressed People Of IIOJ&K

Youm-e-Istehsal is being observed today to express solidarity with the enslaved Kashmiris...