The first match of the Pakistan-Sri Lanka Twenty-20 cricket series scheduled to be held today at Gaddafi Stadium Lahore.

According to the security plan, over 12,000 security personnel including three SSPs, 13 SPs, 131 inspectors and 718 upper subordinates have been deployed for the security of the players and spectators.

All preparations for the T20 match have been completed at Gaddafi Stadium. Owing to the series, the Gaddafi Stadium has set up help centers outside all enclosures, including the gates, which will provide not only the necessary guidance to the fans on the occasion of the series. But also give information about lost and found items.

The World Twenty20 Champion Sri-Lankan team is currently ranked eighth in the rankings while the Pakistan team still holds the number one position in the T20 rankings, Ahmed Shahzad, Omar Akmal and Mohammad Hasan are likely to join the Pakistani squad.

Sri Lanka team training session at the GSL on the eve of #PAKvSL T20I Series pic.twitter.com/D28sYLTKgD

Yesterday during media talks, national team captain Sarfaraz Ahmed said that despite the absence of big players in the Sri Lankan team, this team cannot be taken lightly, a T20 match can be won by a good performance. , Whether in the batting or in the bowling area.

He said that Ahmad Shahzad and Imrakmal were happy to return to the team, both are experienced players.

Pakistan beat Sri-Lanka by five wickets in the third One Day International at Karachi tonight.

Batting first, Sri Lanka set a victory target of 298 runs for the loss of 9 wickets in allotted fifty over.

In reply, Pakistan achieved the target in 48.2 overs for the loss of five wickets. 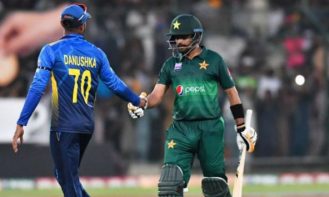