Drinking tea is increases the ability to solve the puzzle game

A forester planted a few larch trees in the Douglas fir forest in Oregon to create a smiley face.

In the coastal part of Oregon, USA, Hampton Lumber has planted this smiley that measures 80 meters in diameter. Its planted on a hillside which makes it visible from Highway 18 in Willamina.

As the smiley is supposed to be yellow, larch was used as the base and for the eyes and mouth, douglas fir was planted. As the larch turns yellow in the autumn, that is the best time to see the giant smiley. 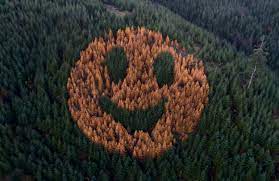 According to Hampton Lumber, it took a week to plant the smiley in 2011. They used a rope to measure the circle and the eyes and mouth were triangulated from that point.

This may not be the most efficient way to plant 0,5 hectares of forest, but it´s nice to hear about forest companies that not only think about short-term profit but also take time to do something funny. Sooner or later, the trees in the smiley will most likely end up in a local sawmill anyway.

Facebook Avatar: Here’s how you can make your own emoji

Since a very long time, we have been using emojis on Facebook...

The youngsters often do things that the viewers either can't believe or...

Saudi teacher Fahd al-Zahrani set a record for a motorcycle tour of...

Mom Caught telling her Son to "Act like You're Crying"

<blockquote class="twitter-tweet"><p lang="en" dir="ltr">this is so DISTURBING what is wrong with mom...

Daughter meets her mother after 14 years of her kidnapping

With the help of social media a daughter contacted her mother. At...

A recent study has revealed that a series of camel sculptures in...

Boat stuck on the rock in Channel Island after being marooned

After it ran onto land the boat was left stuck in the...