Police have published a photo of a wanted guy who was discovered hiding in a wardrobe with his feet protruding out the bottom like a kid playing hide and seek.

This funny photo depicts the moment police discovered wanted criminal hiding in a closet with a blanket over his head.

The 36-year-old suspect’s feet were still visible as they protruded from behind the blanket he was hiding under, giving him the appearance of a kid playing hide and seek.

On Monday, October 4, Derbyshire Police released photos of a man who was apprehended during a raid on a home in Swadlincote, Derbyshire. 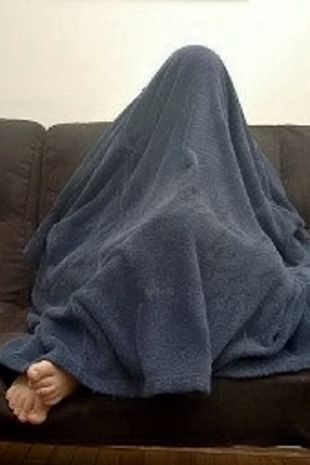 They apprehended the unfortunate suspect on suspicion of committing a series of thefts around South Derbyshire and afterward posted a photo of him on Facebook.

They stated at Taking to the Swadlincote Police SNT Facebook page, “If we can find you hiding in the loft, if we will run through garden fences to arrest you, are we not going to look in the cupboard? Would we not recognize you hiding under a blanket?”

They added, “SNT have been out again doing their early morning door knocks for wanted offenders. Despite being told the offender was not at the address, officers still searched the address.”

“A 36-year-old male has been arrested after being found hiding in the cupboard under a blanket, his big feet gave him away.”

“One more charged and remanded for committing thefts in South Derbyshire.”

According to Sergeant Tarj Nizzer, “If you run from Swadlincote Police you will only go to jail tired, in this case, he had his blanket ready for his sleep in the cell.”

Facebook: Man forgets to hide bag of meth during live video, gets arrested

A Missouri man was arrested after a bag of methamphetamine and a...