To help shape up for the upcoming ICC Women’s World Cup Qualifiers, the Pakistan Cricket Board (PCB) announced a bumper 2021-22 women’s cricket season. 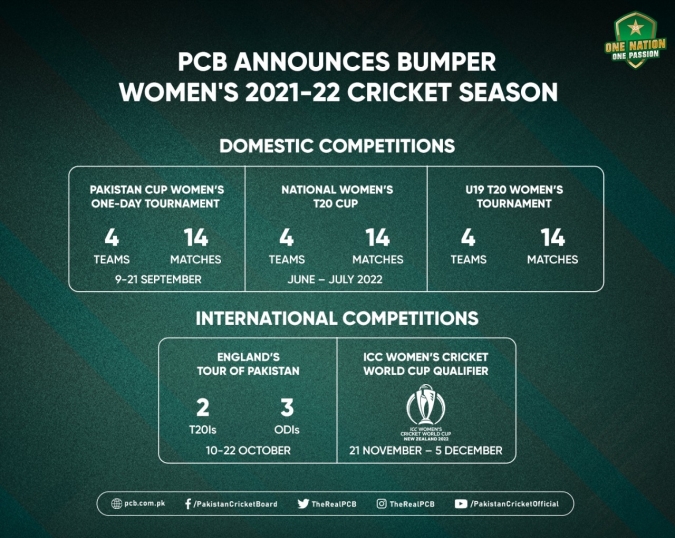 In the coming season, Pakistan’s top women players will be competing in 33 matches, domestic and international.

The season will commence from September 9 in Karachi where Pakistan Cup Women’s One Day Tournament will start with 4 teams competing in 14 matches. It will be followed by series with England women’s tea. This will be the first ever visit of the English women’s team.

The Heather Knight-led side will play two T20Is and three ODIs in October from 10 to 22 at the Pindi Cricket Stadium, Rawalpindi.

Starting from November 21, the national women’s team will play qualifying matches in Zimbabwe. The team will play four group matches and three Super ix matches to qualify for the World Cup.

On the other hand, the PCB is in talks with the ICC for an ODI series prior to their departure for Zimbabwe.

In order to provide necessary training opportunities to the women’s team, the PCB has increased the number of matches, as well as the number of teams across all the domestic tournaments.

With the increasing number of players, the PCB has introduced the fourth team for the upcoming season. This will provide an opportunity for many players to display their skills in domestic competitions.

The PCB has added U19 Cup as a part of the season too. This will help the board identify the qualified players and train them for the first edition of the ICC U19 World Cup 2023.

The season will end with the National T20 Cup. After which the national women’s team will leave for Commonwealth Games scheduled in 2022.

“We are pleased to announce what promises to be an action-packed women’s cricket season for 2021-22. The upcoming season holds a great significance in Pakistan’s women’s cricket history as we have not only planned quality-based competitive domestic tournaments, but also a major team such as England Women, will also be touring the country for the ever first time.

“Pakistan has never before seen such a jam-packed women’s cricket season. The domestic events and the bilateral international series have been designed in a way to provide effective opportunities to the players to prepare themselves for the ICC Women’s Cricket World Cup Qualifier.

“The gradual growth in the player pool through our emerging team and Skills2Shine programme, has led to the addition of a fourth team in our domestic cricket. The increased number of matches will provide an opportunity to a larger group of players, thereby allowing greater opportunities, to polish and enhance their skills, temperament and game awareness.

“Due to the Covid-19 pandemic, we could only organize a T20 event in Rawalpindi last season, but this year we are scheduled to hold both One-Day and T20 events, including the addition of an U19 T20 tournament into our domestic calendar. This event will help identify and develop talented individuals keeping in mind the inaugural women’s U19 World Cup is scheduled for 2023. In addition, it will also enhance the player pool at the age-group level, creating a development pathway and feeder system for the national level.”

Further details will be revealed at a later date.

The Pakistan Cricket Board (PCB) has announced on Monday the schedule for...

England cricketers denied the claims that they were behind England and Wales...