Big Bash League to be organized in December, announced Cricket Australia today, issuing full schedule, however; it could be affected by the pandemic.

The 10th Big Bash League will begin on December 3. Adelaide Strikers will host the Melbourne Renegades, followed by 60 matches across the country and a final on February 6.

But, the schedule could still face hurdles as domestic travel in Australia is currently restricted after Melbourne and Sydney experienced new coronavirus outbreaks recently.

There's more important things in the world than cricket right now, but here's how we'd love to see the summer of BBL unfold. Stay safe and healthy everyone! #BBL10 pic.twitter.com/yE3tKuAEGp

In addition to this, Cricket Australia announced also the schedule for Women’s Big Bash League.

This tournament is in its 6th edition and will start on October 17. 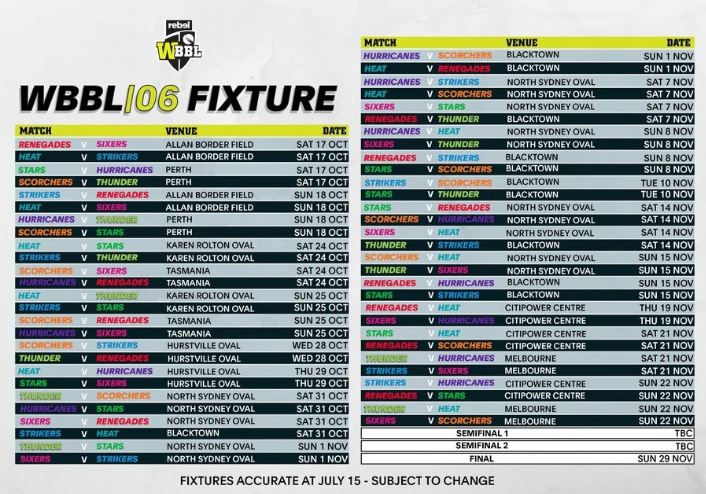 “Scheduling in the time of coronavirus is not without its challenges, as we have seen in elite sporting conditions at home and abroad, and there are factors outside the League itself which could impact the fixture at a later date.”

“That said, at this time, we are happy with the fixture as it stands and excited to celebrate a decade of Big Bash with Australian fans during the summer.”

📅 Our @BBL title defence is scheduled to get underway at the @scg on December 4! 👊

Australia confirmed 270 new active cases of the novel coronavirus, bringing the national toll to 10,251 with 108 fatalities.

Australia’s cases peaked in late March but had fallen dramatically in the weeks thereafter.

Melbourne and its northern suburb of Mitchell Shire could be brought to stage 4 restrictions.

Due to severe financial crisis as an impact of the ongoing pandemic,...

However, this is expected if the number of cases in Melbourne do not come down where 270 new cases reported.

Meanwhile, the state of South Australia has decided to delay lifting border restrictions imposed on the capital, Canberra and New South Wales

Shahid Afridi, the former captain of the national cricket team and representative...

KARACHI: The government is actively pursuing early completion of the China Pakistan...

KARACHI: The tax authorities have estimated the revenue collection of Rs9 billion...

The energy of Extremely intense light from space is unparalleled

LHC Orders Strict Action Against Those Responsible For Fuel Crisis

The Lahore High Court (LHC) on Friday ordered strict actions against those...