Pakistan played the second of three-match T20 against New Zealand today (Sunday) and was defeated by the black caps by nine wickets, however, Mohammad Hafeez’s outstanding performance in the stadium won everyone’s heart.

Mohammad Hafeez was unbeatable at 99 runs, on the last ball to hand, the Pakistani cricketer kept Pakistan’s hopes high as he scored a six.

To appreciate his efforts, Pakistanis including President Alvi, Asad Umar, Fahad Mustafa, and many more lauded the right-handed batsman.

According to the details, Hafeez also trends number 2 on the micro-blogging site Twitter. 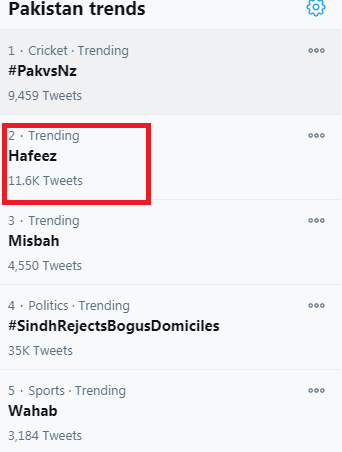 Sublime innings by @MHafeez22. Seems to be in the T 20 form of his life. Rest of the batting seemed to be struggling to time the ball. Looking rusty with lack of match practice

Well played Hafeez. Even at this age u continue to be one of the sweetest timers of the cricket ball. Age & experience does matter after all

New Zealand has won the second match of the T20 series against...

Proteas opener Dean Elgar claims that his side played well against Pakistan...