Globally popular messaging application WhatsApp has once again landed into controversy after a bug that has confused its users.

Additionally the bug was reported on Facebook in Pakistan as the recent posts appeared as shared on January 1970.

The snaps shared by the users on multiple Facebook pages show they received missed voice/video calls on “1 Jan 1970”.

“Does anyone know why is this happening in WhatsApp calling?? It’s been the second time that date appeared in two different chats,” one user posted on Facebook.

One more user said that it’s a “Linux bug based on epoch time”.

In another tech forum, a WhatsApp response was shared in which the messaging app said it was aware of the issue and “working on fixing it in a future update”. 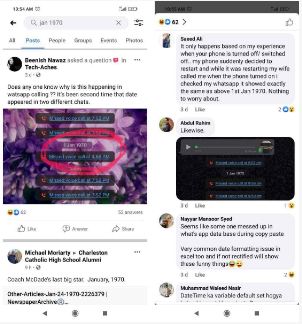 However, no official statement has yet arrived from Facebook over the matter putting the users in a jeopardy regarding the security of their data.

This is not the first time that Facebook experienced a timestamp glitch. In 2015, the social media giant faced a similar problem when its users were sent notifications regarding friendships.

WhatsApp rolls out new update for its Android version

Popular messaging application WhatsApp has rolled out another new update for its...