Deepika Padukone made a promise eight years ago to a photographer; latter reveals if she fulfilled it

The infamous Wedding Photographer Vishal Punjabi shared a fascinating story about Deepika Padukone, while shooting for YJHD, Deepika had vowed to him that he would shoot her wedding.

Eight years later, Vishal revealed that she did fulfill her promise, celebrity photographer Vishal Punjabi took to his official Instagram page, called The Wedding Filmer, a company that he founded, and shared an interesting anecdote about Deepika Padukone.

It would be incorrect to say that Deepika Padukone and Ranveer Singh’s wedding was not the most anticipated event. Almost for more than five years, the couple’s fans had been wishing to see them tie the knot. The Deepveer love story which started six years before they said ‘I Do’ was quite a magnificent occasion despite them making it an intimate one. Deepika and Ranveer traveled to Lake Como, Italy, and got married amongst in the attendance of their close friends and family members. 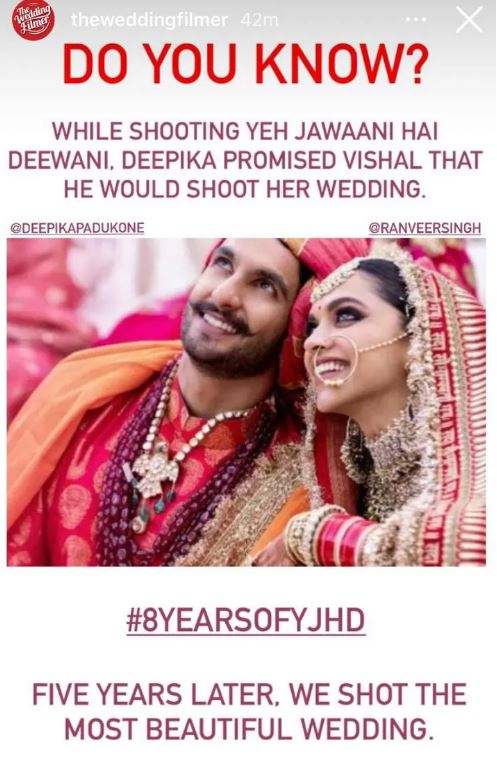 It won’t be wrong to say that when the first few photos of the wedding had surfaced on the web, shared by both Deepika and Ranveer on Instagram, netizens couldn’t keep calm, and instantly it became the talk of the town.

Whereas Deepika’s film Ye Jawaani Hai Deewani clocks eight years today. The movie was directed by Ayan Mukerji and starred Ranbir Kapoor, Aditya Roy Kapur, and Kalki Koechlin. Vishal and his team had shot Kalki’s wedding arrangement in the film and talked about his conversation with Deepika.