Apple, the widely-used technology brand, always come up with variety of new technologies for our convenience in a daily routine. Whether it is a smartphone or tablet or smart watch. This time, Tim Cook is trying to get into the AR game, through the lenses of a new kind of eye-wear, called Apple Glasses.

The most public failure of the AR Apple glasses idea comes from Google back in 2014. However, Apple will not lose the chance of bringing the eye-wear to the mainstream for the first time.

What Features Will Apple Glass Have?

Smartphones are already a second screen in some scenarios, so the eyeglasses might be considered your third screen, bringing information from your phone right to your eyes.

According to a report, the lenses will have a holographic display. Through those lenses, Apple Glass will show anything from texts, to emails, to maps, or games in the wearer’s field of vision.

Multiple reports suggest that Apple is considering creating a fully separate App Store for the headset, as well as a special operating system, likely called glassOS. This falls in line with the Apple Watch and watchOS.

The company is also working on an optical vision correction system, meaning that the smart glasses will eliminate the need for prescription lenses. The system will address everything from astigmatism, to farsightedness, and nearsightedness. 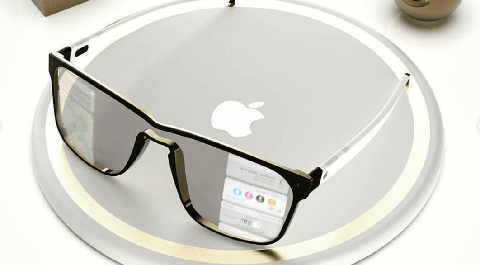 What Are the Specs?

The glasses will probably have at least the same field-of-view as the Microsoft’s Hololens 2, coming in at 52 degrees of vision, as well as a 47 pixels-per-inch resolution.

If Apple Glass plans to pursue true augmented reality, they’ll probably require some connectivity to the iPhone. That way, the iPhone can do the actual video processing, keeping the onboard computing to a minimum in the glasses.

The iPhone could send back 3D imagery to the lenses at a high frame rate per second. Bluetooth wouldn’t make sense in that situation, because these bandwidths are too high for it to handle.

Battery life should probably be a minimum of three hours. There’s always the possibility that Apple could extend that battery life with a special glasses charging case, similar to what the company has done with AirPods.

Apple Glass marketing materials suggest that the spectacles will reportedly look like an “un-intimidating” pair of plastic frames.

There’s a lidar scanner on the right side, most likely to help scan your surrounding environment to help overlay 3D images in a realistic manner, but so far no cameras.

How much will they Cost?

At the time of the launch, The glasses will run you $499, plus the price of any additional prescription that the optical system has to account for. That’s much cheaper than Microsoft’s Hololens 2, which costs a whopping $3,500. The low price probably has to do with the fact that there’s no onboard computer required.

Speaking about the competitors, Amazon is also apparently working on a new product called Echo Frames, which is currently under beta.

They use the Alexa voice assistant to bring information to you, but don’t seem to rely on any holographic lenses or augmented reality.

Pakistan's top athlete Arshad Nadeem has been qualified for the final of...